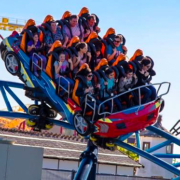 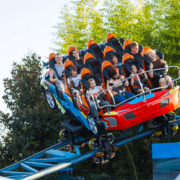 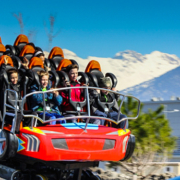 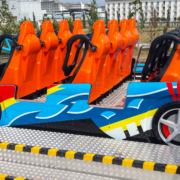 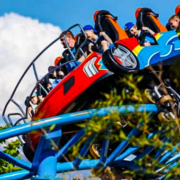 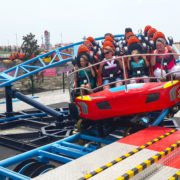 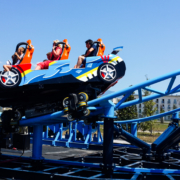 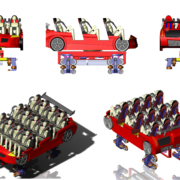 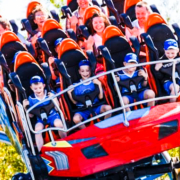 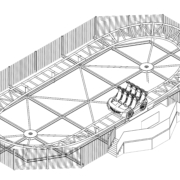 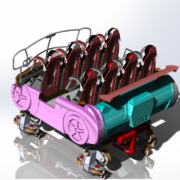 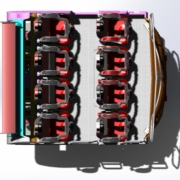 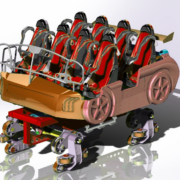 Drifter is a new product of IEPARK srl, an high thrill compact Rollercoaster, powered with ultimate technology LEM SYSTEM (Linear Eddy current Motorized drive).
Single car of 12 seats is launched on the track, while at certain speed, the car starts drifting, until complete spin.
Passengers are seated on board of car, in single seats equipped with safety harness with triple fail system protection (equivalent of loop coasters). The total cycle time is expected to be 3 minutes. The overall footprint size is 20×12 m.

As regards the height of the ride, IEPARK is developing two kind of products: DRIFTER 44 and DRIFTER 64; ie 4,4 mt height and 6,4 mt height.
This configuration allow the product to be considered in various kind of shopping centre.

Drifter has a self standing based anchored to the floor. The overall dynamic load is expected to be within 600-800 kg/sqm, but will result from final
structural analysis and could be well distributed and suitable for lower floor capacity.
The total track development is approx 50 m long, with two semi-circular curves of 5 m radius and straight lines of approx 8 m each. The height difference between curves and straight section is 3mt. The product is completed with entry-exit station and perimetral fences.
Structures and car colours are customable.
The car always stop in the lower point which coincide with the Car station. The total weight of the car is 2850 kg when at full load with 12 rides,
including the magnets.
Launch system of Drifter 64 includes 5 flywheels of 0.8 m diameter.
Definition of final launch system will be determined upon construction of prototype of DRIFTER ride.
The total power consumption of the ride is 37kW. The regulation of the launch system can happen in function of the number of passengers or flywheel speed.

GENERAL INFO ABOUT LEM
It’s a new patented solution for launchers and other type of drives for the fun ride industry. The LEM is a device capable of launching (or pushing or
even braking) the cars in roller coasters.
It has a behaviour quite similar to a linear asynchronous motor, in that there is no contact between the moving and the stationary parts and also because both can launch (or trim the speed of) vehicles passing at any speed without requiring synchronization. The main difference is that the LEM accumulates energy into flywheels, so it does not require the peak of electrical power that’s typical of linear motors. The principle on which LEM is based is the same as for magnetic brakes: a conductor (aluminum or copper) passes in the magnetic field generated by permanent magnets. If one is stationary and the other
one is moving, eddy currents are generated in the conductor and a braking action occurs; if the conductor is moving at a higher speed than the magnet, the latter is pushed.

The moving conductor, in the case of LEM’s, is a disk turning on the same axis as a flywheel and a standard asynchronous motor: the motor will reaccelerate the disk after the launch, in order to launch the next vehicle, but the energy for launching is supplied in a very short time by the flywheel.

This site uses cookies. By continuing to browse the site, you are agreeing to our use of cookies.